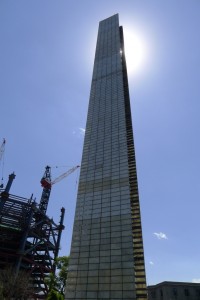 (June 29, 2013)  I am writing this post from a busy cafe in San Francisco, where I am currently on vacation. The city is buzzing with energy. Yesterday, was gay pride day, and the streets were clogged with people, gay and straight, mostly young, most just enjoying the street life and the loud music. The craziness, over the top costumes and antics were replaced by rather ordinary looking young people, who did not need to act up or act down, evidence of growing social acceptance and assimilation of people once marginalized.

It has been 20 years since I came to this cosmopolitan urban center as a young man, about to start my internship at the University of California, San Francisco medical center. I had been a professional student, having completed a Ph.D. in molecular biology and medical studies at Baylor college of Medicine. After driving across the West in my old Toyota Camry, accompanied by my sister Lan, we reached late in the night the apartment that I had rented on the edge of campus. The place was left rather dirty by the previous tenant, but my sister declared that it was beautiful. It was to be my home for the next 7 years.

Until I came to San Francisco, I did not truly appreciate the degree to which I had been virtually cast off to the edges of society. Growing up as an Asian in America in the 70’s and 80’s, you did not feel validated in any way. Asians occupied a small stereotyped niche in this society, much as other minorities have. Asians were considered both exotic and threatening. But here in San Francisco, I felt that I was simply one of many. There were Asian people doing manual labor, Asian people driving the bus, and Asian people doing whatever type of work. I didn’t attract any attention at all, and that was the strangest feeling.

I think that we all have to develop this insight, in order to find the fulfillment that life promises. Sometimes, like I was, one happens to be in an environment that facilitates our psychological growth. Frequently, one has to create that environment by utilizing the guidance of a psychotherapist.

This entry was posted in Uncategorized. Bookmark the permalink.

This site uses Akismet to reduce spam. Learn how your comment data is processed.